Wow this moves so quick in unity! The barrel and stock are the same sadly… I have not started those yet… So it could look better =P… and will 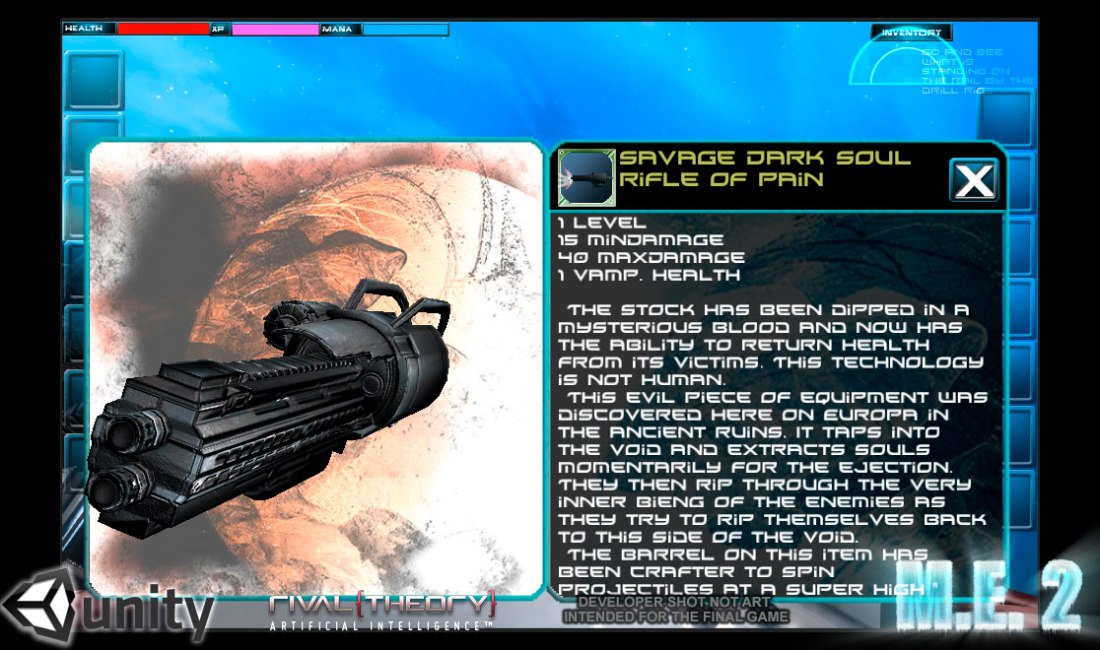 This gun shoots multiple balls of energy and they all do damage!… Powerful and it will be rare =)… the mid piece at least. 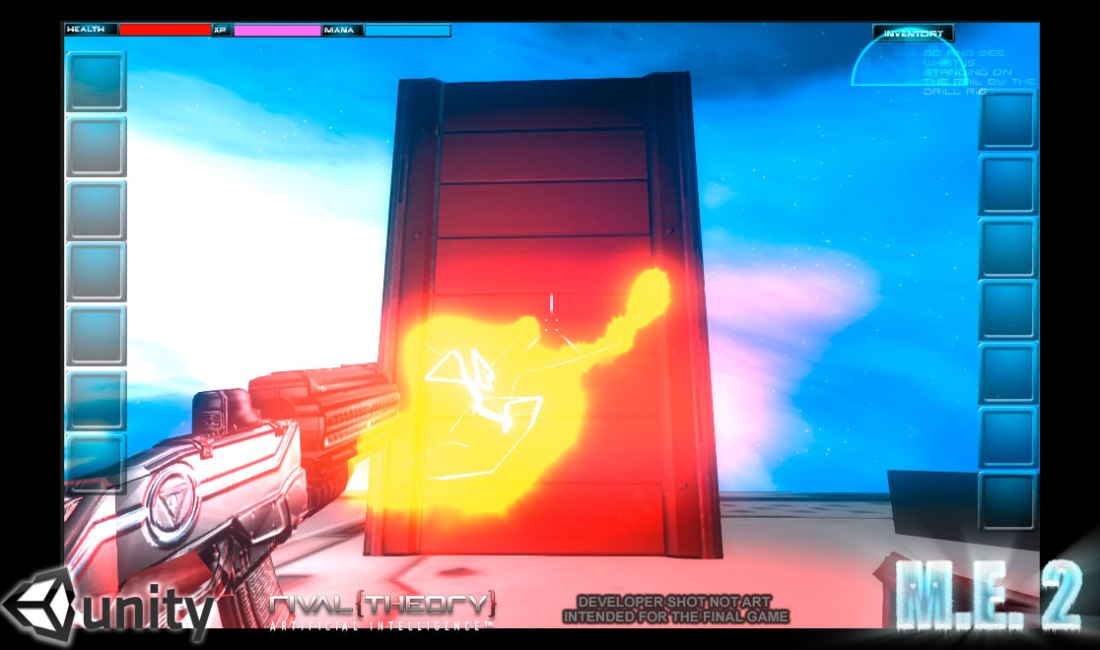 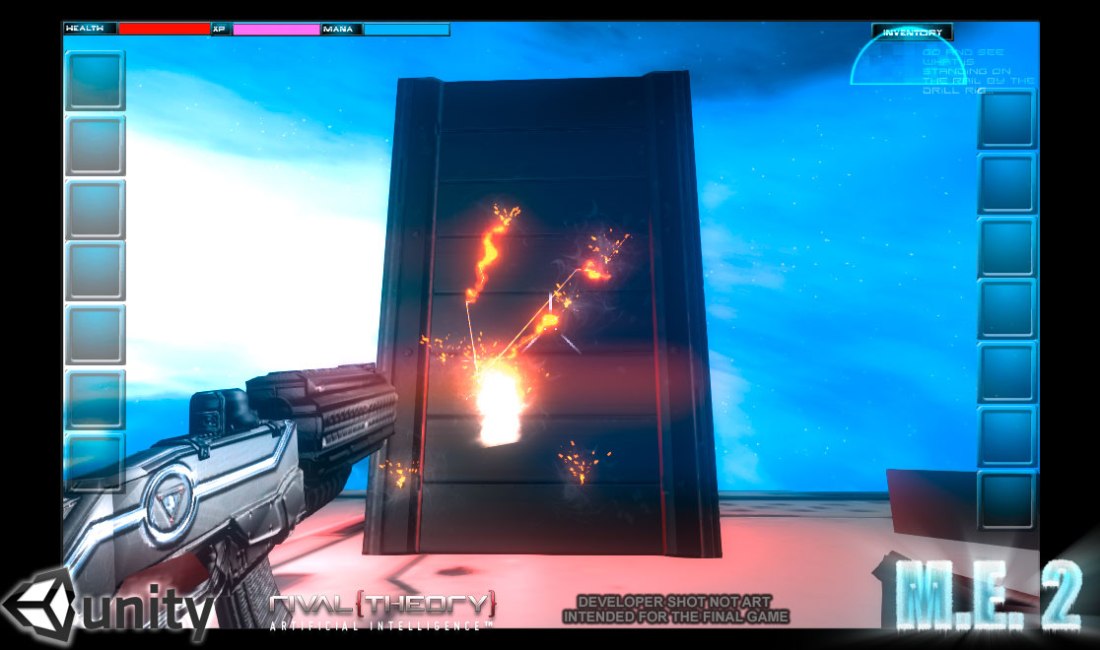 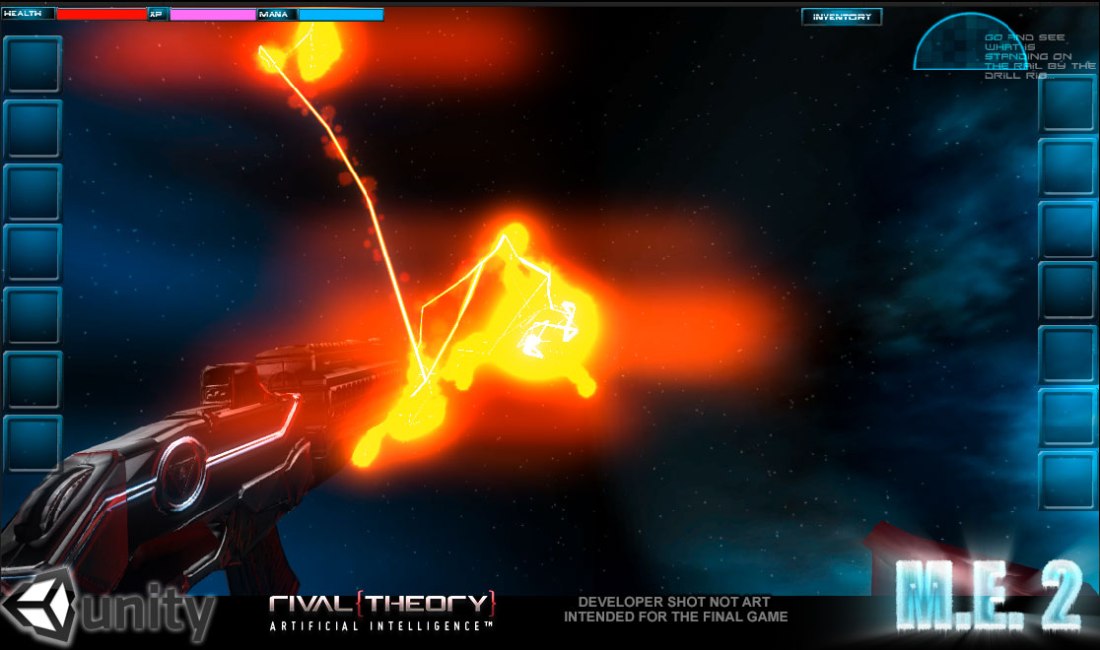 So now they break apart… It is a really nice effect and excuses the lack of the ability to pick them up after they are killed…. It is pretty cool to see the scattering…. Really good stuff… IGNORE the shader on the bad guy something is screwy and he looks awefull… Ill fix that now..

Today I am putting some time in. I am adding in things like dropping weapons on death of ai, converting the skinned mesh to a mesh on end of ragdoll, etc. Just the little stuff.. I am almost done and then I will get back to putting items in the game again and fleshing it out. The last items that need to be added now is the story, sounds,cut scenes, and final pre-alpha testing. Then on to open testing just the starting level. We will need to play the junk out of it and make it as good as possible =)

QUESTION: Ok I do not want you to be able to pick up the weapons dropped. So should I have them break into three pieces when dropped… or two… etc… or just add story they are infected and usuable…? The characters drop chests you open…

But he died went ragdoll dropped what he was carrying and then converted to a mesh!

Here is a fully fleshed out item created from 3 different parts that all add to make its story and stats.

A plasma rifle put in in minutes and working! =) Sweet all the upfront prep work and designs are paying off in spades!

Now that I am finally into almost all asset mode I will have a lot of screens to critique  =) like the below gun.. I still need to fill out the stats and description but it works and fires =).. I have 343 different combinations of just rifles… 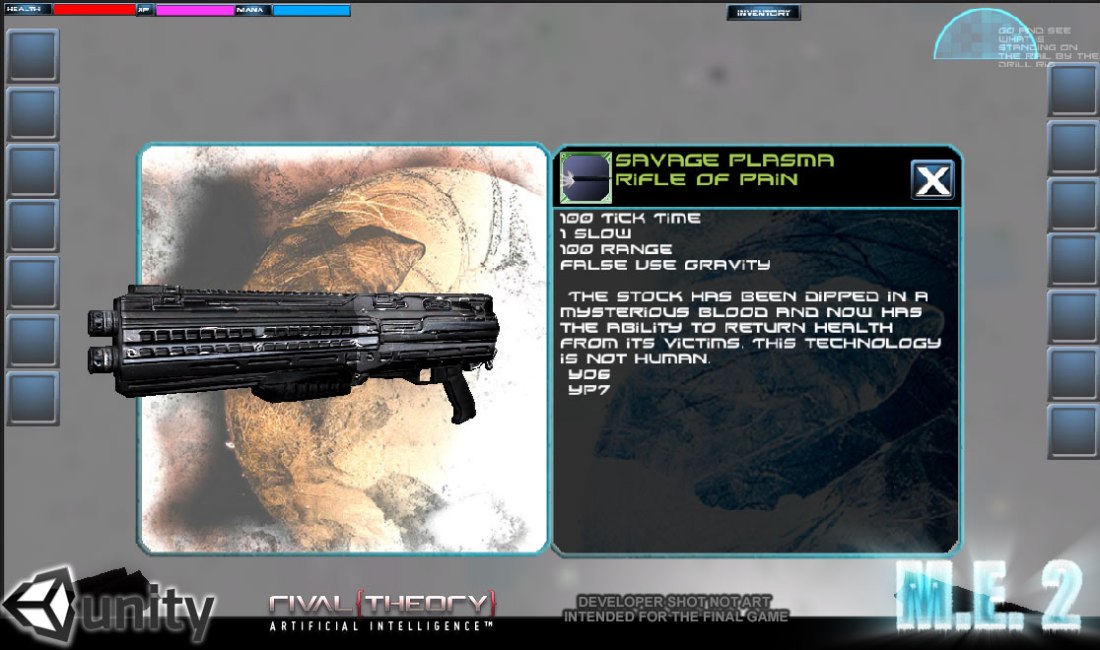 And there is a possible weapon you can get =)…. 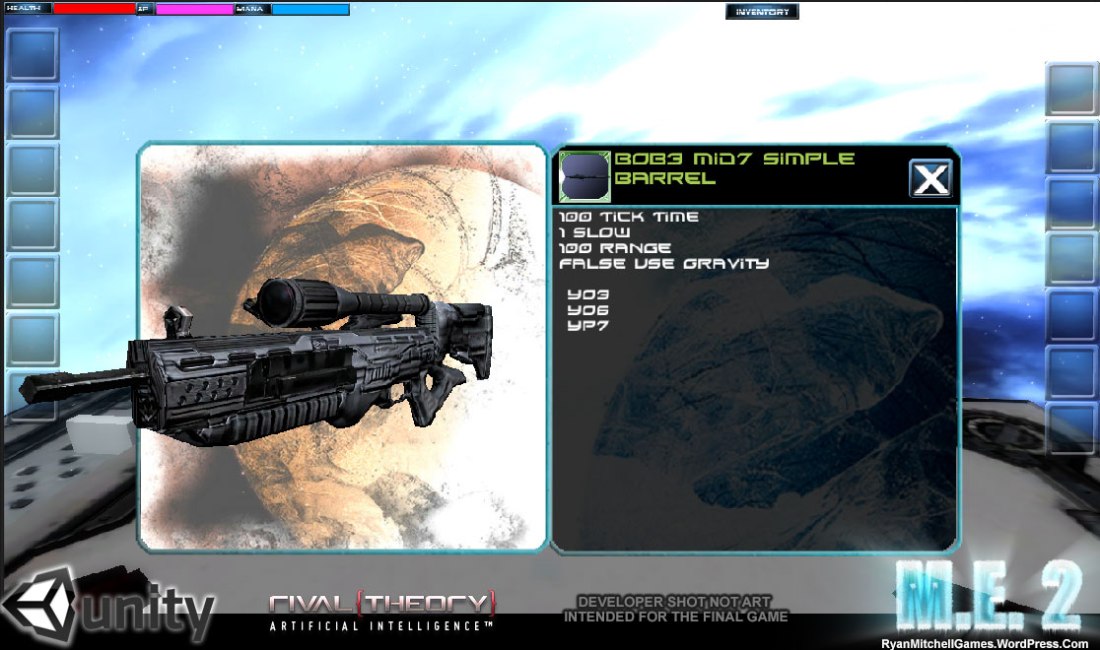 I want to be able to spin the items to look at them. I currently just randomly spin them and it feels clumsy. So that is the next target along with getting all the weapons done. I have 24 parts in so far and they go in really quick. I need to create swords, pistols and abilities to fill up the game =-).. This part goes much quicker then all the intricate code and engine workings =)

Update: I am placing in the weapons now… a few glitches to deal with… I cannot wait until all the systems are rock solid and I can just pump content in =)… anyway tonight will be a short night of work I had a rough day job day… More tomorrow…Have a great day!

Now I am on to adding in assets FINALLY!!! All the systems are go. All the little quick hacks so I could get something else working are gone… the systems are simplified… Awesomeness!

Anyway the first set of items to finish are the weapon parts. Then I will be moving on to the armors…One HUGE difference in ME2 is the enemies all can have different weapons. ME one limited the level to an enemy type and each type had the same weapon… not in 2 =)…

And the new pickup chest ui.

Here is the reworked Item window. All items are now working off the item word database. So an item is described by a set of up to 3 words, a level, and a quality. Very awesome and moving forward!… more later.. I plan on busting my hump this week after work hours!

There are so many items and the way armor works memory would be quickly eaten up… So I am going to do UI things to greatly reduce the effect. So here chests come back. They will store the word descriptions and the level only =)

Unity is great but some thing should just work better. Now when I drop an item to the world I add a bounding box collider so it can land and bounce……. welp it never lines up right on my skinned meshes…. So who knows how long what should be a simple thing will take to fix… I know it is much shorter then shoe horning Unreal into a game other then a straight FPS shooter… but it is aggravating…

LOL and the good thing about unity is someone else has hit this…. 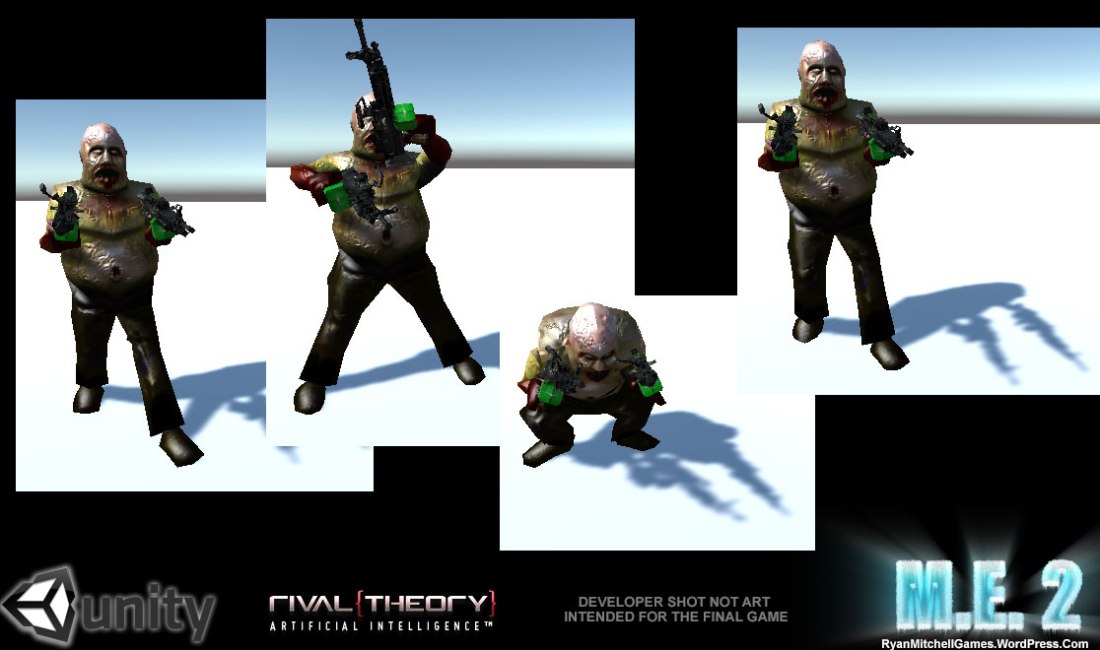 Glad the character and item systems are done now… sheesh… He is constructed from items as body parts are items in Mission Europa 2 also =)…..more later

However now I completely understand how unity works with skinned meshes, combining them, animating them, and bind poses. That is worth the time…A few hints for others… When exporting from blender be sure your model AND armature have the right rotations. My model was rotated internally which you cannot see when bound to an armature (skeleton). The envelope was concealing it was rotate…I simply applied the transform and it was fixed. It did take a while though argh….

So now I take a piece that is saved out in bind pose. Grab its skin and bone weights. Store the names of the bones for adding to the new skeleton. Then I get the bone wieghts and look of the name of the old skeleton bone and find what index it is in the new skeleton and save it. Repeat for each piece and each skinned mesh and whaalaah. A combined skinned mesh with one batch call.. I would also say look out for skeleton names. Sometimes Blender or Unity  not sure which added a period into the name instead of the _ it was. It might have been me but I do not think so..That made the armature only animate partially… Anywho on to invetory item and equipment window clean up. Then I will start shooting stuff and collecting items =)..

I was having alot of issues getting the weapons to stick on the right bne and be rotated correctly… everything finally worked out when I reset the bone it was attaching too to zero rot and pos. Then add item rotate it to be right and go…. That should have been easy.. but it was not working across all animations… The kicker is in the animation mask deep down in the animation only a few animations did not have the bone with the mask off. SOOOO I had written a debug line drawing tool that shows the bones forward out and up … this is how I saw it was not animating correctly as it is invisible. Then I tracked it down to the mask. Now all are happy and I am moving forward again finally!

I fixed ALL the animations… Got the new weapons in hands to work!… Moved all systems to generic not humanoid…If only I had more days like this!.. Now I am going to finish up the equipment window as it needs to be updated with the new animations settings… THEN I will start playing the game again and see what needs adjusting system wise. Once I get it all going I will start adding in all the items!