Update: 1hr 30 minutes into a room and I should have about 2 hours left until lighting… =) awesome!!!! It took me at least 40 hours a room last time lol and with far less detail and items around. There is about 20x more detail and polygons in these scenes =) NO MORE 3gs support =P… More later.. I should be getting the level into lighting tomorrow sometime. More later!

15 minutes in and a level starts to form. Unity is awesome! The asset store is also pretty awesome to boost game making speed. After I get the base level together I add in the creepy stuff. More Later.

I think I found more work time non holiday easily then holiday with all the freinds and family so active… But things are still moving. Now it is time to create the rooms!… I need to start with a sketch and then build them in unity which is pretty doggone fast to build in. More later!

I am finalizing today how character stats and items work together. Not real exciting so not much to say =P… More later and hopefully on to more exciting stuff…..

I have to figure out why a collider is not triggering on a mesh with a NavMesh AI unit. Quite tricky but I hope to get that done. Then get on to building the first rooms!!! I have the AI in and attacking in Melee fashion and that will do for now. I will come back to it pre Alpha testing and really tweak it up. It is VERY easy in  unity and all the scene awareness tools they have.

So I expect to begginning level 1 today by creating the first set of rooms. I am not sure of the final count but I think I want the first levels to be composed of at least 5 rooms to combine in random ways to create the level like I did in ME 1. I need to create the systems to not allow them to collide with each other, close doors, create down ramps or stairs to the next level etc. Lots to do here but once complete I will be 85% done with the game and I will just have to fill in story and art assets.

So off to work.

I have combat working. I can now shoot the poor guy. And he then switched from animation to a ragdoll and collapses =)… awesome.. a lot to do still but we are there! 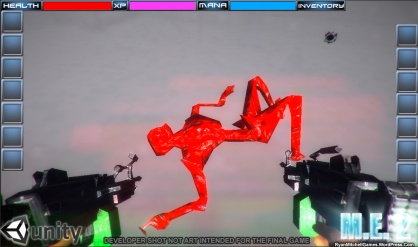 I removed it out to a copy in system so it is not always using resources even when disabled. Then once something dies copy in the ragdoll and apply forces. I cannot wait for grenades to be done. I will apply the rag doll take a vector from the bomb to the ragdoll parts and apple force.. thus flying bodies! =)

Update: Took a detuor and got ragdoll physics on my created characters. It was quite complicated to copy all the correct items in. I still need to finish it but after that on to more combat!

In 3 hours I got up and running what seriously took a month in my own engine. I also used nav meshes but I wrote it ALL.. Collision detection, path finding, targeting, sight lines etc….Unity gives me compact fast great solutions for all that. I just have to write the finite state machine =).. AWESOME.. So now the AI can fall land with animations then come after you and attack with a melee attack. Now I need damage and death to occur. I have a stats class already that all items use. I will add a container class called CharacterStats. This will contain base stats (for speed so I do not have to process all items on every change) that are built from all items worn and used to create the character, modified stats which are the stats after all buffs are applied (these get processed every time a buff is applied), and current stats which vary base on the game conditions. IE hit points, mana energy that change. Then another array of buffs that are currently applied.

On an attack these values are changed and when HP = 0 death. Pretty simple. The more time consuming part is designing how the attacks occur. I am thinking of sticking them in the state machine. Store in the character the range which is derived from the weapons. No weapons = melee range, rifles are X, pistols are Y, thrown items are Z. So when the stats are built the range is also derived for AI only. Simple! … more later….After combat I finally get to clean up level 0 and start level 1!…

Update: Freaking insane… in an hour I had attacking AI even making the animation =)… So they drop out of the sky.. land with animation..when they see you they then walk to you and smack you in the face… now time to kill them COMBAT TIME! 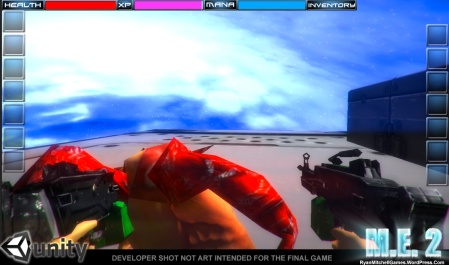 Update: Wow I LOVE Unity… I have the state machine in and running. Here you see an AI falling from the sky and hitting the ground then showing the land animation. He then stands up and next will be chasing you =)… sweet! This is moving very Quick!… Next will be combat!.. I should be killing baddies within 2-3 hours of work time. Amazing. After that I will clean up the main base and get the elevator working which access the first ten levels of the drill site. The room generator will be next where I create one room and create the scripts that will build the levels. Good freaking stuff 6 weeks of after hours and sporadic day work times in….I should moved to Unity from my engine a year ago, however not having the GUI tools would have REALLY slowed me down. SO I am ok with just moving on it now.

Today I need to get the state machine started. I want to start with AI dropping from a height and landing animating a land and recover. Imagein walking down a dark hallway and things drop out of holes in the ceiling from a random script added to the level all around you.When they land they stand and attack. Some take cover. You Pop five abilities to protect yourself and fight out of there. Once clear you use Reyem Neas summon to blow the whole room to hell. =) That is the kind of action that is my goal for Mission Europa 2. With Unity that should be a breeze =)..

Update: Wow one day guns in almost in one day. Next day AI walking around a nav mesh chasing me. Good stuff Unity!…

Now.. there is a bit to go on the AI of course but that are in walking around and animating as seen in my little test area. They are also being constructed from parts in a database and then placed in the world with all the items needed to make them work. I need to add weapons and items etc to them but first I want to be able to shoot them and kill them =)… finally some fun testing =P..

Update: Another praise is unities simplified shader and surface shader systems….I popped out a normal mapping diffuse and specular mapped shader in about 4 minutes… so good yum..

Another think out-loud day. It is time to start working on the AI. I want the AI to tie into level events that are random and built into the level.

How this is going to work.

1. Each level is constructed from a set of 5 rooms. They are interlocked at doorways. In each room there are several positions defined as a type. The types will be pipe burst, spark, intrusion (a model comes through), steam vent, blood spray, oil spray, electrical short, etc. There is a trigger placed in the scene tied to this item. They go off once but not all are used. At runtime some are disabled and some enabled. As you approach the boss of the level addition items are added to the event IE a taunting scream earthquakes while the main boss roars. This will be the event system. Some rooms will have rock falls etc. not always though. Just to spice up the level.

2. AI Spawn. At load time when the rooms are assembled. In each room are markers where AI can spawn. There is a module called AIMgr in the level. There is stored 3 types of walkers, 3 types of flyers, a possible mini-boss with good loot by chance but very tough, and the level boss. The items they are made of create the stats. The bosses have a boost ability of some type assigned to them.

I need to research instancing to increase the number of enemies. However, if it shows to be a problem I am more in the mood to have better reacting AI then hordes. The hordes can be achieved by the fliers.

After I get the above functional I will attack the AI taking cover. Welp.. more later!